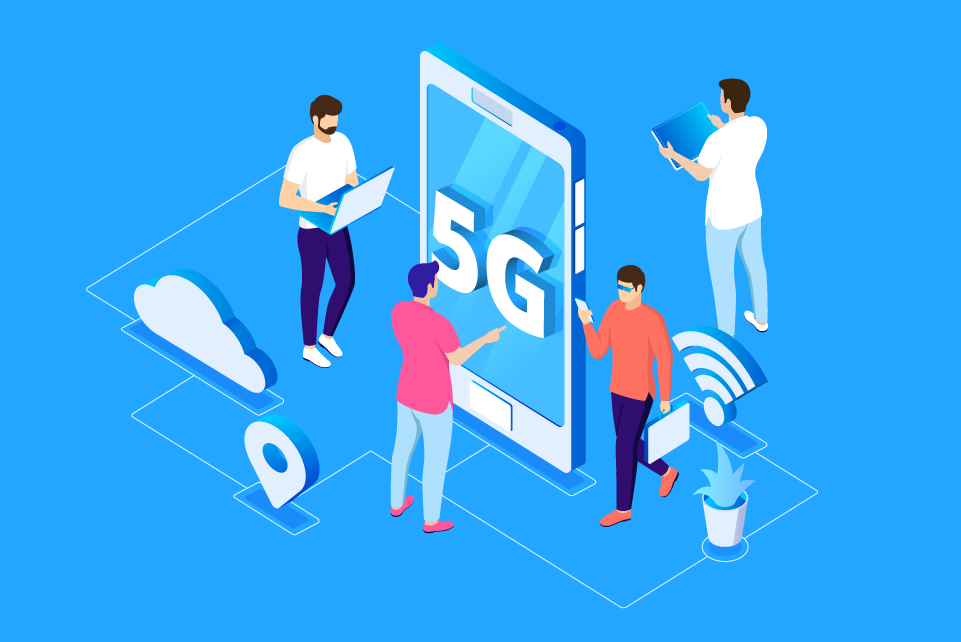 When the 4G network first appeared, it seemed as if all of humanity’s network problems would be addressed. They could converse easily, get signals even in the most distant areas, and enjoy super-fast internet speeds. But why not take it a step further and let people know about the 5G network? Fifth-generation cellular networks have the potential to revolutionize communication throughout the globe. Now that 5G is getting a lot of attention, the apps will also change. App developers would recognize the significance of this fast network and work on the opportunities it provides to reap the rewards. It will have a significant influence on the mobile app development business due to faster speeds and connections for mobile applications.

There is no question that the advent of 5G networks will have a profound effect on the world of android app development. It should be noted that 5G is not a simpler variant of 4G. This is a whole new kind of communication technology.

According to experts, it will fundamentally alter the way we interact with our mobile devices. For instance, on 5G networks, apps must be able to handle very rapid data transfer rates. The user interface of the app must also be updated by the developers to be compatible with 5G networks. Furthermore, developers must modify the app’s user interface to make it compatible with 5G networks. As a result, you need to engage a UI & UX developer to make the necessary improvements to the program.

The following are some of the benefits associated with 5G technology:

How 5G will on Mobile App Development?

The creation of mobile apps for augmented reality (AR) and three-dimensional (3D) games will see a surge in demand. Network issues and latency prevent mobile app developers from providing much more service for augmented and virtual reality. However, 5G technology’s potential for reduced latency means a better experience for end users, who will be better able to engage with the app. Applications that make use of modern 3D printers have many potential uses in industries including education, construction, and e-commerce. A user can, for instance, virtually try on clothing without physically traveling to the shop or donning the items in question. A home furnishings retailer can employ 5G network speeds and virtual reality to give customers a sense of how various pieces of furniture will appear in their homes before they make a final purchase decision. Thus, there would be infinite opportunities to revolutionize the shopping process and the consumer’s outlook on online retail by developing an immersive shopping environment. By handling more information, mobile app developers can get more users to sign up for their service.

5G will bring in a swarm of fresh connected devices, for which developers will create a wide range of applications. Furthermore, it will pave the way for many Internet of Things apps to be built for mobile platforms. These apps will run at their best, consuming less power and using a limited amount of data. With 5G, developers will be able to use ambient technologies with the help of machine learning and artificial intelligence to create smarter applications. All of this will speed up the adoption of connected devices, which will make the user experience better and more enjoyable. In a nutshell, this cutting-edge technology will help companies boost profits.

It is predicted that 5G-enabled apps would give customers with enhanced media capabilities. It will significantly improve the video streaming industry by making high-definition live streaming possible at a much higher bit rate. Reduced latency will help video applications run more smoothly. Extended battery life will allow users to watch streamed content for longer periods of time. Developers can use the app to advertise products and services by adding high-quality 4K videos.

Another characteristic that performs well in data-driven applications with high data rates is eMBB. Using this capability, apps may be created with responsive and engaging interfaces, increasing the probability of app success by attracting more users. Other methods for increasing user engagement include the use of technology such as augmented reality (AR), virtual reality (VR), and so on. Thus, mobile app development can find a new breather with the help of eMBB.

One of the most alluring aspects of 5G is its scalability. It boasts fast data transfer speeds, making uploading files to the cloud a breeze. The capacity for cloud-based data storage and the ability to relocate IT facilities are two further benefits of 5G. Just what does this entail, if anything? With cloud accessibility built into mobile app development, developers may reduce their dependency on expensive hardware. Users can quickly and easily access their cloud storage due to minimal latency and high performance. You can successfully reorganize your business with the help of cloud computing.

With GPS-based mobile app development, information will be sent to users more accurately. 5G’s increased speed and connection will provide real-time accuracy of results, enhancing the functionality of navigation apps. These applications are useful for the automobile sector. The efficiency of autonomous cars will be improved as a result. Furthermore, they can aid in the distribution of enhanced interactivity through wearable and portable gadgets.

The 5G network when implemented at its full capacity, it is ought to create some serious waves in the mobile application and web development world. The introduction of 5G networks will change the way people use their phones and provide better opportunities for app developers. As a result of the 5G network, programmers will have the opportunity to test out new platforms and applications that improve upon the user experience by making it quicker and more convenient.

So, if your mind was brewing an app idea that wasn’t possible up until now, because of low latency or mobile bandwidth, and with 5G you can work on that project, then let AppleTech help you with your dream project.

How AppleTech can help you?

AppleTech relies on the best UI/UX designing team to help you create apps compliant with 5G networks. Notably, the 5G network is all set to take the user experience up by several notches through its impressive features offered at a better speed.