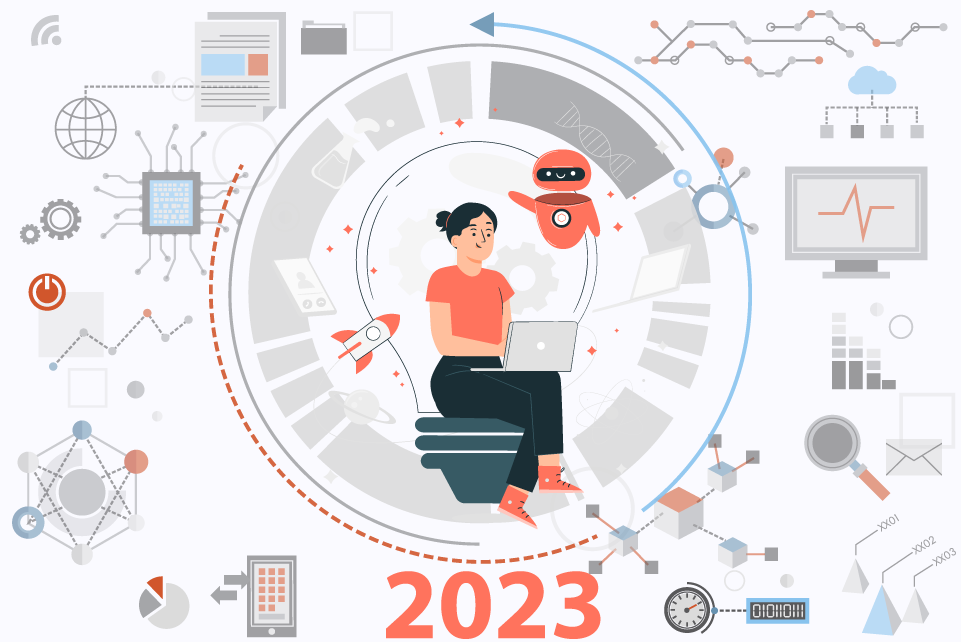 Technology is developing at a rapid pace. However, it is not just technological trends and new technologies that are developing; much more has changed over the past year due to the outbreak of COVID-19, making IT workers recognize that their position in the contactless world will not be the same tomorrow. Additionally, an IT professional in 2023–2024 will be in a perpetual state of learning, unlearning, and relearning (out of necessity, if not desire).

Natural language processing and machine learning advancements will make artificial intelligence more prominent in 2023. Artificial intelligence can better comprehend humans and do more complex jobs using this technology. It is predicted that 5G will change the way we live and work in the future.

As we have entered New Year, it’s natural to start thinking about the future and what it may hold. In the tech world, this means looking at emerging trends and predicting which ones will have the most significant impact in the coming years. While it’s impossible to know what the future will bring, a few trends seem poised to make a big splash in 2023 and beyond.

Artificial intelligence (AI) and machine learning (ML) have been buzzwords for a few years. Still, they will only become more critical in the coming years. AI and ML are already being used in various industries, from finance to healthcare to manufacturing. The trend is only set to continue. By 2025, the AI market will be worth $190 billion, with worldwide investment in cognitive and AI systems exceeding $57 billion in 2023.

One area where AI and ML are likely to have a significant impact is the field of robotics. As robots become more advanced, they can perform a broader range of tasks, including those that humans currently do. This could lead to the automation of many jobs, which could have both positive and negative consequences. On the one hand, it could lead to increased efficiency and productivity. Still, on the other hand, it could also lead to job displacement.

By 2023, the technological gap between humans and robots will have shrunk even more. In the actual world, robots like this will serve as greeters, bartenders, concierges, and seniors’ companions. In addition, they will do difficult jobs in warehouses and factories while working alongside humans in manufacturing and logistics.

One business is making significant progress toward developing a domestic robot that can do human-like tasks. Elon Musk showed two Optimus humanoid robot prototypes at Tesla AI Day in September 2022. It indicated that the firm would be ready to accept orders within the following 3 to 5 years. The robot can do basic chores such as carrying objects and watering plants, suggesting that we may soon be able to have “robot butlers” to assist us around the home.

Once an emerging technological trend, cloud computing has matured into an established industry dominated by giants such as Amazon Web Services (AWS), Microsoft Azure, and Google Cloud Platform. More and more companies are switching to a cloud-based system, indicating that cloud computing’s popularity is only increasing. However, this is no longer cutting-edge technological development. Edge computing is.

The potential threat of quantum computing is that it might make our existing encryption procedures obsolete. That is, any country that develops quantum computing on a large scale could break the encryption of other countries, enterprises, security systems, and other systems. This is a trend to keep an eye on in 2023, as nations such as the United States, United Kingdom, China, and Russia invest heavily in creating quantum computing technology.

Augmented reality (AR) and virtual reality (VR) are two technologies that have been around for a while. Still, they are only now starting to gain widespread adoption. AR involves the overlay of digital information in the real world. In contrast, VR involves the creation of a completely immersive digital environment.

AR and VR have a wide range of potential applications, including gaming, education, and training. In the coming years, we are likely to see more companies exploring these technologies in their products and services. For example, we may see more retailers using AR to allow customers to visualize how furniture would look in their homes or more companies using VR for employee training and development.

The Internet of Things (IoT) refers to the growing network of connected devices that can communicate with each other and with the internet. This includes everything from smart thermostats and security cameras to wearable fitness trackers and household appliances. According to projections, about 30 billion of these IoT gadgets will be in use worldwide by 2030, resulting in a huge network of linked devices ranging from smartphones to kitchen appliances.

As the number of connected devices continues to grow, the IoT will likely become an increasingly important part of our lives. One of the most significant potential benefits of the IoT is that it allows for the automation and optimization of many everyday tasks. For example, a smart thermostat can learn your schedule and adjust your home’s temperature accordingly. A smart irrigation system can adjust the amount of water it uses based on local weather patterns.

5G is the next generation of wireless technology, and it’s expected to bring several improvements over the current 4G standard. These improvements include faster speeds, lower latency, and the ability to support more devices simultaneously.

One of the most significant potential benefits of 5G is that it will enable a whole new generation of devices and applications. For example, 5G could enable self-driving cars, remote surgery, and virtual reality applications that require low latency and high bandwidth. While 5G networks are still in the early stages of deployment, they are expected to become more widespread in the coming years, so 2023 could be a big year for this emerging technology.

This is the period of digitization, in which the world is transitioning to virtual experiences, influencing everyday life, and generating additional channels for user involvement. While 2022 saw a technical breakthrough in the digital arena, we are just months away from a big revolution.

New trends will emerge in 2023 to revolutionize experiences and enhance day-to-day operations, risk prediction, security, and so on. To remain ahead, IT leaders must plan for the future and create a roadmap for adopting and incorporating these trends into their businesses. The only question we need to ask ourselves is, “Are we prepared for the next technological advancement?”