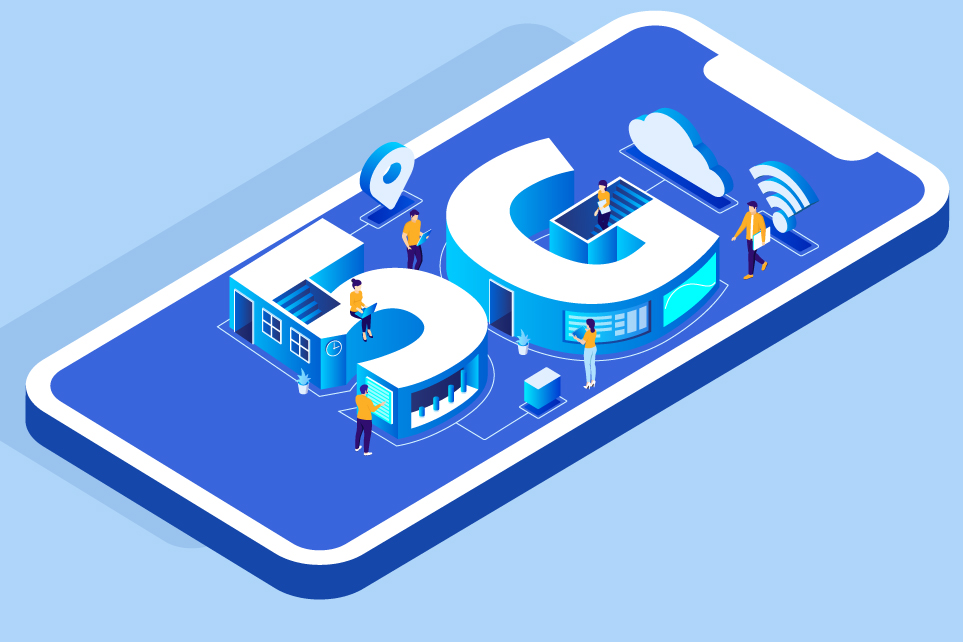 In line with the soon anticipated global rollout of 5G, it’s predicted that over 1.4 billion devices will be running on the 5G network by 2025 – accounting for 15% of the global total. Also, according to various surveys, reports and estimates, 5G is expected to contribute $12.3 trillion of global economic output by 2035.

As we’re about to enter a new golden era of 5G, the fifth generation of wireless mobile telecommunications that not only accommodates already existing opportunities of its predecessors but also offers a much faster data transfer speed of at least 1 Gbit/second and up to 50 Gbit/s.

Even, in some test environments, 5G has reached around 1 terabit per second (1Tbps), which is roughly 65,000 times faster than a typical 4G connection. However, in a real-world environment, you can expect 5G to deliver a consistent data transfer speed of 2.8Gbps. It really is a game-changing technology!

These statistics give mobile app developers a good insight into the bright future of 5G, encouraging them to prepare their existing apps to win the 5G race and launch new apps with 5G possibilities in mind.

With that being said, let’s take a look at the potential impact of 5G on mobile app development:

There are many mobile apps that are centred on the premise of transferring files, money or data from one device or account to another. By leveraging bits of the electromagnetic spectrum instead of radio waves, 5G will prove to be a boon for such mobile apps by making the transfer process exponentially faster. This will result in users being able to stream 4K and 360° videos from their smartphones without any lag whatsoever.

One of the greatest benefits of 5G technology is the clarity and enhancement of the user interfaces. Just watch a video or live stream on a 2G, 3G or 4G networks, then do the same over a 5G Network and you’ll probably understand the marked difference. Undoubtedly, the new network will encourage developers to elevate the app UI to a huge extent thereby enhancing the user experience especially for the media rich content consumers.

With rocket-like speed and ultra-low latency, developers will have the option to incorporate more features with increased capacities to IoT, virtual and augmented reality apps, which will lead to exceptional and powerful user experiences. This will not only help developers increase user retention but also will play a vital role in increasing the overall mobile app revenues.

High-quality, uninterrupted audio or video communications will open up a whole new world of opportunities for the development of navigational apps. In fact, 5G will contribute a lot towards the growth of the travel & tourism industry. For instance, a developer will be able to build a mobile app containing all the popular historical places from different countries as well as offering a bunch of unique features to users.

With the arrival of 5G, mobile app development related to 3D gaming, 3D modelling and immersive augmented reality will get a great boost. The use of 5G-enabled mobile apps with cutting-edge 3D printers will allow users to create top-notch quality 3D models of objects in no time at all. Such mobile apps will be used in multiple industries, spanning from construction to fashion to education.

Although Chatbots aren’t ready to fully replace humans yet, the synergy of 5G and chatbots will definitely create better opportunities for real-time, prompt feedback. Also, the arrival of 5G could even lead to the dawn of tactile internet, where users can control and receive haptic feedback from state-of-the-art machines.

5G means blazing fast real-time communication between devices, where millions of MB of data can be transmitted within a snap. Consequently, the performance of a mobile app will be less dependent on the processing power of the hardware of mobile devices because data centers will be doing all the processing.

Now, let’s take a closer look at things that mobile app developers can incorporate into their apps to make the most of the 5G network capabilities

This is all about delivering users digital experiences that involve the surrounding environment and conditions with the ability to facilitate and measure to machines, devices, sensors, and technologies such as AI, ML, and IoT. Thanks to the increased power of 5G, which makes the implementation of ambient computing through wireless networks possible, developers can leverage this opportunity in their mobile apps to provide users with more reliable connectivity and wireless support.

Owing to the comparatively slow nature of current wireless technologies, developers today are required to work in waiting periods for their apps having a download process. Many even recommend executing the same process only over Wi-Fi, which can hinder the availability of the app. However, with the release of 5G, developers can allow users to download and install substantial data packages over mobile networks too.

Given that Internet of Things (IoT) is one of the most popular segments of the tech market today, developers can take advantage of smart home gadgets, wearable devices and sensors in their mobile apps to make them more capable of connecting with multiple devices at the same time.

The advent of 5G will definitely bring a new boost to AI and ML-based apps that collect and analyze a massive quantity of data to make spontaneous decisions. With greater access to an open connection and reliable wireless support, app developers will be able to empower their apps to turn analyzed results into on the fly-decisions more promptly.

Many mobile apps and services are currently leveraging cloud technology as “SaaS”. However, due to patchy internet connections, this idea is not as rampant or accepted. But, by harnessing the true power of cloud technology through 5G, developers can build much faster and smarter cloud-hosted apps that will soon become everyone’s go-to applications.

Nowadays, VR technologies are not only being adopted extensively on a consumer level but have also become a vital part of mobile app technology stacks. Unfortunately, streaming support through VR is still nearly impossible due to serious latency and bandwidth concerns. Eliminating all these concerns with the help of 5G, developers can make their apps ready to deliver truly virtual reality experiences to users.

Since 5G is a more reliable and battery efficient network than its predecessors, devices will be less likely to disconnect from the network. With this kind of always-on connectivity, developers can leverage the constant access for their mobile apps, providing users with a more advanced ambient connectivity.

In a nutshell, owing to its blazing fast speed, zero network latency, and higher bandwidth, 5G technology will prove to be a game-changer in the mobile app development arena. Not only it will open up a whole new world of possibilities for developers to improve their mobile apps but also it will emerge as a blessing for users in terms of user experience.

We at AppleTech are braced for this challenge and are already enhancing our capabilities for developing better mobile applications that can leverage the 5G advantage. Get in touch with us to see your concept turn into a mobile application!