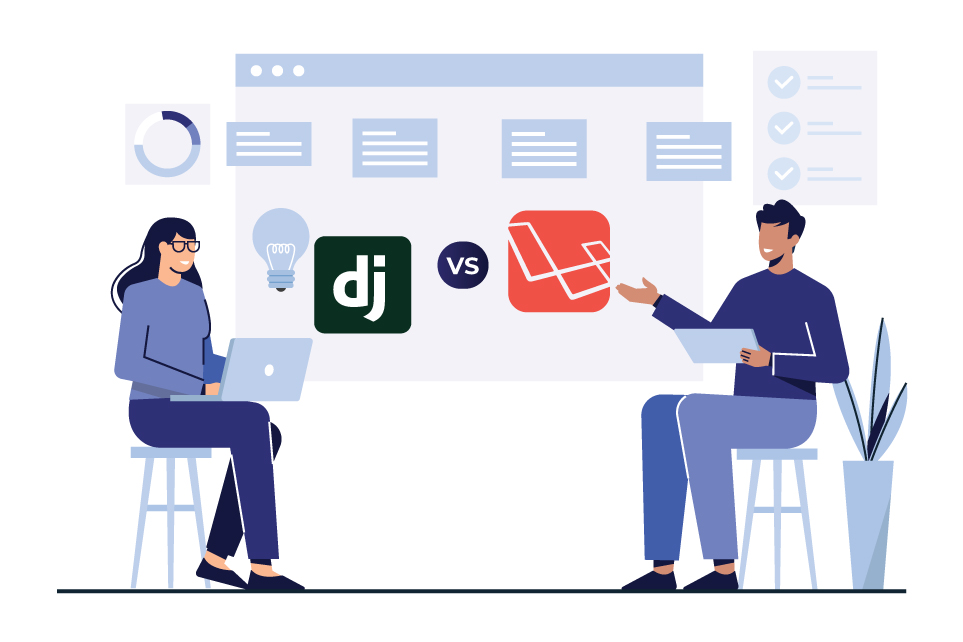 Despite the popularity and the rising demand for mobile development, web development has been getting a tremendous amount of attention and the technologies are evolving quite rapidly. Javascript’s skyrocketing popularity brings a lot to the table, especially with the rise of new development concepts like Progressive Web Applications, Accelerated Mobile Pages, and Single Page Applications. However, things started to get more complicated, especially for young developers who are just getting started.

The sheer amount of available technologies to choose from, the different functionalities they provide, the differences in each one of them and the fact that there’s no holy grail in web development, nor a one solution fits all, all of this makes it quite scary to embark on a learning journey.

This is why we’ll attempt to demystify the process and shed some light on these different technologies here. Two common technologies in the web development world are Django and Laravel, which are back-end development frameworks.

Django is an MVT or a model view template framework built with python. It’s a free and open source framework that encourages rapid development and helps developers write efficient cleaner code. It’s quite a powerful framework and it’s used by some of the greatest enterprises in the world as their back-end infrastructure. These companies include Pinterest, Udemy, NASA, and Instagram.

Laravel is an MVC or model-view-controller framework built with PHP which is one of the most famous languages of the web. It’s also a powerful framework used by 9GAG, UNION, Toyota Hall of fame.

Let’s take a look at some basic routing code written in both languages. At the first glance, you can notice that Laravel’s code is quite intuitive. Django’s code, on the other hand, seems rather complex, that’s because it uses regular expressions in its routing process, which are not the easiest thing to use, especially with beginners.

Ex: Page Route Declarations in both the languages:

Both Django and Laravel communities are very active and responsive. Both the communities have a large number of contributors on Github and commits are also very frequent. If you ever get stuck at some point in either of these frameworks, then somebody from the community would get you out for sure.

Learning curves a little mythical since it depends on the individual. If you’re comfortable with Python’s syntax to a good measure, then Django should be fairly easy to pick up. It’s supposed to be developer-friendly and should not take long to learn. If you are interested in Django, here are the best Django tutorials recommended by the programming community.

Laravel is said to have a steep learning curve, but with tools like Laracasts and the good documentation, it should not be hard at all to pick up the framework and master the PHP language right along. If you are interested in Laravel, here are the best Laravel tutorials recommended by the programming community.

Laravel and Django were tested head-to-head in 2018 for JSON serialization and since python’s quite a speedy language it won by a landslide difference. Django performed 69k JSON responses/second while Laravel was at a humble 8kresponses/second. In terms of speed, Laravel doesn’t compare with Django, unfortunately.

The world of the web is quite a hostile environment, with attacks and vulnerabilities being exploited all the time, this is why frameworks need to take measures against different attacks, whether SQL injections or cross-site-scripting. Django takes security quite seriously and helps developers avoid the common mistakes of web development and implement some security best measures. While Laravel does also cover the basics of security it doesn’t live up to Django’s security level. That’s why, for example, NASA uses Django for their website.

You might not be interested in all the functionalities that a back-end framework has to offer and would rather build a client-rich application with a RESTful API. The beautiful thing about Laravel is that it comes with built-in support for API building, as the queries return JSON by default. Django doesn’t come with this built-in feature and you’d have to use a library to work around it and implement the same feature.

Keep in mind that these frameworks support big websites, so there’s no wrong choice to make. It all depends on the software requirements you have and your design. Also, back-end frameworks are quite similar at their core, so it’s not so hard to transition from one framework to another if you feel like working with another framework. We at AppleTech are adept at creating solutions on Laravel Frameworks and Django.