Native Apps vs Hybrid Apps – Which One to Choose 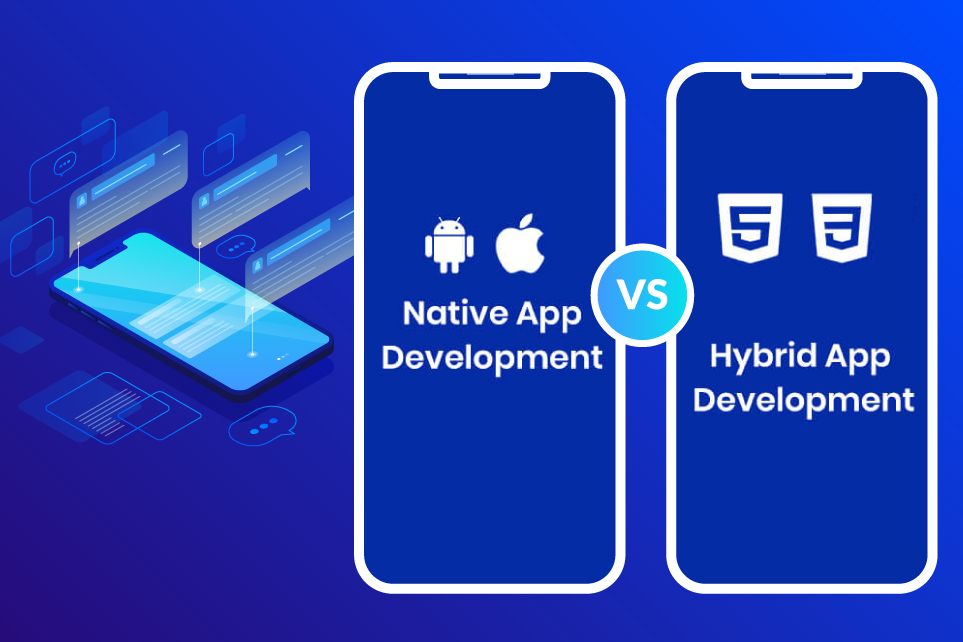 Almost for a decade now, mobile apps have become a kingpin of innovation. With the growing market of smartphone devices, most of the organizations are adopting ways to incorporate mobile apps in their business flow, in order to enhance their market outreach.

Most of the companies face a common challenge, such as, what should be built – native app or hybrid app? Which will be the best for the organization? The answers to the queries depend on factors such as the following:

Native apps are programmed to work with specific operating systems. An app coded for iOS will not work with Android and vice-versa. Native mobile apps follow particular guidelines to enhance user experience. Developers can build apps that leverage all the features of an operating system. Native applications required developing separate apps for each platform. Hence, the development of such apps can take more time and cost. The benefit though, being better performance.

The development of native apps in Android and iOS requires different frameworks.

Native apps can also better utilize offline mode capabilities. Focusing on a single platform increases the efficiency of the app. The combination of all these factors improves the overall user experience.

When an app is coded for a particular operating system, it has high-performance metrics. This is due to better optimization of memory and storage achieved through code. Native mobile apps are also easier to maintain and update.

Unlike hybrid apps, native apps can fully utilize the hardware capabilities. Hence, it offers high data security to users. Can read more about the security of apps here.

Native app development offers access to the latest features as soon as they launched so developers can easily integrate them within the app.

Native apps can help adjust the layouts. With these apps, you can have the best design while delivering an excellent user experience.

With the increased complications of developing native mobile apps, the price increases too. The need for excellent resources and experienced developers makes the entire process expensive.

Since applications need to be developed separately for both platforms, it requires more time. Even developing one native app takes more time than a hybrid mobile app.

While native apps are developed for a particular platform, hybrid apps have cross-platform properties. This means that hybrid apps can run over multiple platforms. Developers can make one application that will run on both iOS and Android. These applications can be viewed as websites put into containers. Mostly they use the rendering engine of the built-in operating system browsers.

The three most popular frameworks for hybrid app development are as follows.

Hybrid applications can run on both iOS and Android with the same base code since they do not have to develop separate codes for both platforms.

One code will run on both iOS and Android platforms. A hybrid app developer only has to work on a single code, making it very time-efficient.

Since there is only one base code, it becomes effortless to update the program. There is no need for the user to download the latest version to fix a bug.

Only one base program needs to be built for both platforms, which drastically decreases development costs. As a result, it is much cheaper than native mobile apps.

Since in some cases they are basically websites wrapped in native apps, you need to be connected to the internet to use all features. This might not be true in the case of React Native.

As the interface needs to be compatible with both platforms, several functions are compromised. UI in hybrid apps is not as strong as native apps.

Many functionality issues in hybrid mobile apps require a native app developer to solve them which could lead to additional costs.

As described above, both sets of technologies have their unique advantages and disadvantages. While you can choose native to build the best user experience and responsiveness within the app backed with state of the art features, the cost can go high.

With Hybrid you can start with lower investment and still build an app, costs could increase with complexity. That being said, it’s worth using especially to test the waters.

Don’t think about the concept of native vs hybrid app. A few questions that you should ask yourself before choosing technology would be about your timeline, budget, complexity in features (Are you building something that pushes the technology envelope), the security requirement, and so on.

At AppleTech, we have the experience and the expertise to build Native as well as Hybrid apps. Reach out to us today with your concept and see it transform into reality.